As a church we are partnered with another church in a town called Konjic, in Bosnia & Herzegovina. The church is led by Fisnik, an Albanian pastor and his wife, Manjola, and they are supported by Sarah, from England.

You can find out more by scrolling down, or contact Chris to find out other ways in which we support them.

Fisnik & Manjola, along with their 3 sons, Sami, Xhoni and Ruben, moved from Albania in 2012 to set up the church in Konjic.

Fisnik & Manjola have a heart for all their neighbours in Konjic, sharing the good news of Christ through both church activities and in many other practical ways. Their work includes studying the Bible with individuals, children's work, teaching English classes, and reaching the wider community in Konjic. They also seek to encourage other Christians in Bosnia, through prayer and meetings. 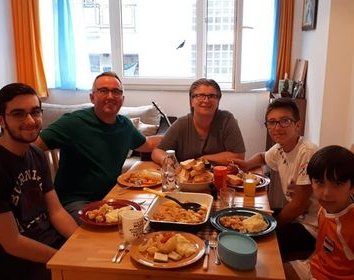 During the early 1990s, Bosnia & Herzegovina saw lots of armed conflict as part of the breakup of Yugoslavia. Even today, as you walk through Konjic, the buildings are peppered with marks from bullets and explosives. If you go for a hike on the mountains around the town, you might even stumble into an area with warnings about the mines still left in the ground.

During the conflict, neighbours turned on neighbours, friends struggled against friends and family fought family. Underlying the fighting was a lot of religious tension. Different nationality groups within Bosnia identify heavily with religion; with Serbs being Orthodox, Croats being Catholic, and Bosnians being Muslims. The few who identified with another faith group would be looked on almost as a traitor. The struggles of the 1990s were only the most recent in a long cycle of violence.

It is difficult to forget something so tragic and horrifying, especially when it happened so recently. As such, under the surface in Bosnia & Herzegovina, you'll find religious hostility, suspicion and extremism. Bosnian Muslims are possibly the least evangelised people in Europe.

Christchurch Redbourn is partnered with a church in the town of Konjic, called Baptisticka Crkva Konjic. Below, you will find links to their Facebook page and their recent Youtube channel!

As well as supporting their work financially, CCR is committed to furthering our relationship with the church in Konjic in other ways as well, regularly praying for them, and increasing our correspondence with them. We also share news and encouragement with each other as we both look to spread the good news of Christ through Konjic and Redbourn.

We're excited and privileged that we've been called here to pray, get to know people, and share the love and truth of Christ with them. Most of what we do could be described as 'relationship evangelism'. Regular prayer together is a priority for us, and over the past couple of years we've also been really blessed by the occasional prayer days we've hosted where other believers from around the country have come to pray with us here. Our regular activities include English classes and a weekly kids'/ mums' group. Often we go out for coffee or home visits with local friends. We all feel that we're very much welcomed as part of the community in Konjic, and many of our friends recognise that there is something different in our lives. It takes a long time to develop trust in relationships here, and it's always very special when people ask us for advice or share their burdens; listen to the Gospel, or allow us to pray with them. We trust that Jesus is building His Kingdom here. On Saturday mornings we meet together for church fellowship, and sometimes on Sundays we visit the Baptist church in Sarajevo, or churches in other towns. Sometimes Fisnik is invited to preach, or Sarah goes to lead worship in other churches. 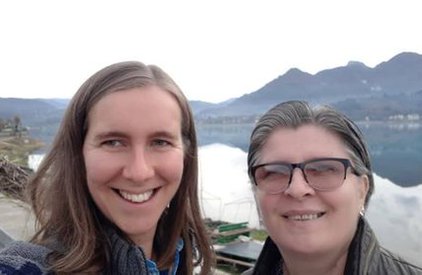 In 2015 Sarah went out to Konjic from Derby, UK, and now lives there, working with Fisnik & Manjola.

Sarah is a tremendous support to Fisnik & Manjola, running many of the church activities, such as teaching English classes and children's work. She also works very hard to establish connections with women in and around Konjic, reading the Bible and praying with many of them. Sarah also plays the guitar!

I moved to Konjic 5.5 years ago, sent by Urban Life church in Derby. My primary calling from God was to prayer, and I have a special burden to see followers of Islam come to know and worship the Living God through Jesus. For the past few years I've been teaching English to some small adult classes, and a couple of times a week at the local pre-school. I enjoy time with God out walking; sometimes meeting and praying with people in the villages in hills.

I also have a heart for the Roma (gypsy) community, and one of my Roma friends comes over weekly for Bible study.

Sign up to Sarah's Prayer Letters
Back to Mission